How Many People can Travel to the Kumbh Mela in One Day.

From New Delhi to Allahabad by Rail

As getting a train ticket in India is a herculean task, this post aims to estimate the situation of available train seats at the peak time during the Kumbh Mela in January and February 2013.  The world famous festival will observe people coming from every part of the world to witness the grandeur of the pilgrimage. Following is list of trains from New Delhi to Allahabad and the speculated waiting scenario for the ordinary public to travel by rail during the Maha Kumbh if the tickets are not booked well in advance (120 days). The list is taken from the Indian Railways website on 30-Aug-2013.

Hence, people who can travel from Delhi to Allahabad in a day are: 24500+ 11500+10000= 46000. This is current maximum capacity. But it can be estimated that during the peak Kumbh Mela season, this capacity will increase threefold per train raising the traveler count to 1,35,000. The situation is one of a kind and can only happen in a country like India.

Many private websites are providing Swiss Cottage accommodation for the Kumbh festival but according to the officials there are no such websites providing this type of accommodation.

There are no websites issued by the Government for allocating cottages to private agencies, Mr. Dwivedi said, adding that necessary information about the Mela is available on the official website of the Kumbh Mela.”

This is from The Hindu newspaper  http://www.thehindu.com/todays-paper/tp-national/tp-newdelhi/article3729838.ece  read more on this link.

this is from Time of India  http://m.timesofindia.com/city/lucknow/Fake-websites-selling-Kumbh-cottages/articleshow/16804727.cms

[box] Special Accommodation for Our Visitors. Get your Kumbh Mela accommodation with spiritual organizations or with tour providers at cheaper rates. For details contact us.[/box]

The official website for booking cottages is Uttar Pradesh Tourism.

This above photo is from UP tourism website. The accommodation rates are cheaper than that provides by the other private websites. Most of the websites featuring in Google Search Results are personal websites launched by travel agents and their authenticity is highly dubious. The next post will feature complete rates and comparison with other private rates. People who are on a budget trip are recommended to stay in dormitories as they are a lot cheaper than the other housing options during the festival and would cost around $10 a day.

Visit my facebook page for more information on  Kumbh Mela 2013

Allahabad is also known as Prayag Raj. The name bears roots to an ancient legend which says that after the creation of the world, Lord Brahma offered the first sacrifice at Allahabad and hence the place came to be known as Prayag which is the place of sacrifice.  It is famous as it is the confluence (sangam) of the three most holy rivers in Indi: the Ganges, the Yamuna and the subterranean Saraswati. All three rivers hold a pious and divine status in India and it is believed that bathing in the water of the confluence will bring auspiciousness and fortune to the individual’s life.

Allahabad is renowned across the world as it hosts the magnificent Hindu festival called the Kumbh Mela. According to legend, it is believed that drops of nectar fell near the confluence point of the three holy rivers thereby giving them mystical powers. Millions of people gather at the river banks (ghats) to take a dip in the waters and purge themselves of all sins and thus attain Moksha (Salvation). The festival observes participation of people of all ages, religions, castes and creed in mutual harmony and equality. The festival is attended by Sadhus and saints who follow the path of religion. Some of the highlight saints of the festival are Naga Sadhus, who never wear any clothes and are always smeared in ash; Urdhwavahurs, saints who renounce physical pleasures; Parivajakas, who have taken a vow of silence and Shirshasins, who stand for all 24 hours and meditate.

The attendees of the Kumbh festival have the same common goal of finding the ultimate truth and thereby ending the mortal life of suffering and attaining salvation. Underlying the popular belief is the basic principle of Immortality accounted in the Vedic texts which claim that the supreme reality is not the material body but the eternal soul (Bhagvad Gita) which neither dies nor takes birth.

Allahabad is considered as King among holy places in India.

The highlight feature of the Kumbh Mela is the bathing ceremony (snan). Millions of people travel across the globe to take a dip inthe Ganga, Yamuna and Saraswati during the festival as it is believed by doing so one gets free from the baggage of sins committed in his lifetime and also attains salvation which is freedom from the cycle of birth and death. The Vedic Scriptures account for several other reasons to take bath in Holy Rivers like Ganges, Yamuna, Godawari and Narmada. The bathing ceremony is the most auspicious activity in this festival apart from the enlightenment one receives through spiritual discussions with the saints.

In Vedic culture, every river is personified as a deity and the water stream is interpreted as the material manifestation of that personality. Rivers are deified as mothers as they are a source for human existence. River Ganga is one of the most special rivers as it is believed to come directly from the ocean of milk by washing the lotus feet of Lord Vishnu. Bathing in the holy waters of Ganga is believed to be most auspicious at the time of Kumbh Mela.

After 12  long years the grand event is again at the doorstep for people to grab the opportunity to witness the magnificent spectacle at Allahabad, the place of confluence of the three holy rivers,  in January, 2013.  The details about the most auspicious days during the festival on which devotees will take the holy dip in the waters of Ganges, Yamuna and the lost Saraswati are enlisted below:

These are the dates when millions will come to take a holy dip at confluence of holy rivers at Allahabad. For further help please visit  Kumbh Mela 2013 Facebook page and post any queries about the festival. 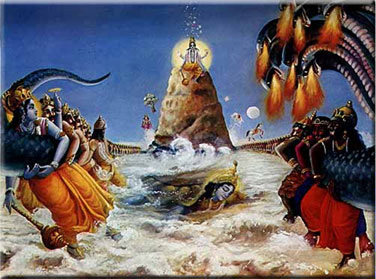